I had a chance to speak with Eugine Roszo this week.  Eugine’s stage name is simply, ROSZO.  What initially caught my attention was the breadth of his imagery on Instagram (@roszomusic).  Roszo’s debut EP Give It All is a collection of exploratory works featuring an emergent alternative style amongst contemporary indie singer/songwriters.  From the heavy electric rock roots behind Chains to the lighter acoustic tones of Mystery, the EP captures a range of Roszo’s evolving style. Produced by Will van de Crommert, Give It All is craftly layered with acoustic guitars, keys, synth, catchy hooks and Roszo’s haunting vocals.

CM:  Tell me a little about your background.
ROSZO:  I clearly remember my childhood summers by the Black Sea in Mykolaev [Ukraine]. The sands were burning hot with thorns that would cut your feet, a metaphor for the difficult lives that many lead there.  The views of the Sea are mesmerizing – I will never forget them.  The closest thing I can compare them to is the view from atop the mountains Santa Barbara looking out at the Pacific Ocean.  At age 7, my mom and I immigrated to the US, moving to Minneapolis.

CM:  Minneapolis is a hotbed of music.  How did your musical interests start?
ROSZO:  Northeast Minneapolis is an ethnic melting pot, with many diverse cultures. Like others in the community, I had to learn a new language. Communication was not an easy thing at first, so I was drawn to the arts to more fully express myself.  Music, dance, drawing, and painting were all spaces where I felt understood and was given the freedom to create.  During school, art class was where I felt the most freedom. Being the weird immigrant boy instills in you a pretty strong desire to conform. This constant tension of wanting to be like the others disappeared during art classes where I could let my hands do the talking for me. It felt like anything goes.

My musical journey began around age 10 with piano and early influencers like the Beatles as well as classical and traditional Ukrainian music. I picked up the guitar in my teens, listening to 90’s rock, such as grunge, pop/punk and metal. Around this same time, my interests in singing and songwriting began to develop.  One of my earliest memories of Ukraine was actually playing around with an old guitar belonging to a relative. I doubt they were too happy with me. Later when I became more serious about the guitar, songwriting just seemed to just develop naturally. I literally had just learned two barre chords and wondered if I could write a song with that. Needless to say it wasn’t very good, but it was still invigorating. Same deal with singing. For me, the two have always gone hand in hand. I had found my ultimate tools of expression. 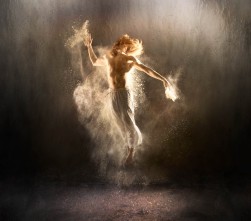 CM:  You told me that you had a period of low creativity.  Why was that?
ROSZO:  Following the death of my mother, I experienced a disconnection from my artistic passion and self identity. I was in a kind of survival mode for a while, losing a lot of confidence in myself. Despite it all, writing songs and composing music were solace for me, and I continued to work on my skills in private. It was through the help of close friends that I was able to regain my confidence and rediscover my passion for the arts that never really left me. With that newfound determination, I committed to a musical career.

CM:  You are into kinesthetics as well.  How does that work?
ROSZO:  Many things impact my music including, as you say, dance and karate. For more than 10 years, I danced with Cheremosh, the Minneapolis-based ethnic Ukrainian dance group, performing at venues across the state. Also I’ve been practicing Shorin-Ryu Karate for 15 years now and am currently ranked as a second degree black belt.  For me, dance is freedom incarnate – freedom through movement. Yes, there is some structure and choreography to uphold within any particular dance, but the energy and soul one can pour into movement makes it a powerful medium. It has instilled in me the desire to pour that same energy into my songs. Like dance, Karate is quintessentially an art form. Both are elaborate displays of yin and yang, soft and hard, slow and fast, and reflect a balanced way of life.

CM:  Your Instagram account has a wide variety of photographs, including some really interesting jumping shots.  How did those come about?
ROSZO:  As I said a few minutes ago, I was drawn to many forms of art from a young age – including the visual arts.  For example, I enjoy painting.  Photography was a slightly different beast.  I had to build a bit of confidence to come up with a wide range of concepts that I hope others will find interesting.  Then, I relied on a friend to help me realize those visions.  I should say it has been as much a collaboration there as it was with the production of my music.  As I said, it helped me see a more balanced approach to all my artistic forms of expression.

CM:  Where can we listen to your music and what’s next?
ROSZO:  Give It All, the EP, was released in March, and the music is available on Spotify and most other streaming services, iTunes, etc.  Give It All is just a taste of what I’ve cooked up so far. I am nearly done with the early drafts of my next album, which will be an evolution in both style and musical direction. There are many new songs on the way that I look forward to sharing soon.