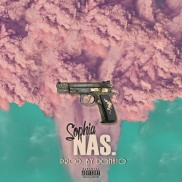 20 year old East Atlanta native Sophia has debuted her fiery, feminist anthem “Nas.” Produced by Donato, this single is the first to come from her EP “Love, $o” which is expected to drop February 14, 2017. The up and coming West African singer paints a vivid scene through the record about an ex, which gives off an empowering vibe for women of all ages. The vibe from the song correlates to a scene from Waiting to Exhale with her revenge fueled lyrics.
Listen to the song via the link below and be on the lookout for the visual to Nas coming soon!