In a span of three years, emerging Atlanta artist, Supakali, has accomplished a lot, independently. He has released two projects, opened up for Rick Ross in Washington DC, performed in venues and festival stages across the US. He is always winning over new listeners, while expanding his fan base. Over the Summer, the Georgia native took on the Big Apple as he made a temporary move to focus on his music career.

During his stay, Supakali recorded new music, shot a music video, performed a couple shows, and linked up with Harlem’s own, Jay Pres – who has worked with artists such as Dave East and Tray Pizzy. Together, the two emcees are a dynamic duo in the studio and it’s evident on their first ever collaboration. With Kev Cairo on the beat, “1000” will have you cranking up your speakers and singing along to the hook.

Supakali’s “The 5th Quarter” drops soon. And will serve as the precursor to his long-awaited “Soon You’ll Understand” album 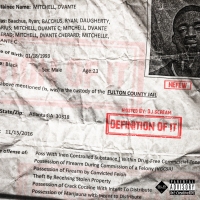